Where did the time go?

In 2010, Soke found himself in Phoenix's East Valley. People around here call this area Mesa and Gilbert. In 2006, he was living in the remote village of Laramie, Wyoming - not quite the North Pole, but cold enough in the winter that its climate is often compared to Fairbanks, Alaska and Yellowknife, Canada. If you ever experienced -50 degrees Fahrenheit, you will understand: the grease in your truck gets close to freezing making it difficult to turn a steering wheel, while tires freeze with the flat surface that had been in contact with the road all night, and the oil in the crankcase doesn't want to wake up and complains if you try to turn the engine over, and then there's the problem of turning the engine over. Sometimes you give up and ski to work - bad idea.
With the wind blowing at non-stop 30 to 50 mph with gusts up to 80 mph (at nearby Arlington, they recorded gusts of more than 120 mph in the winter) (other places call this a hurricane, Wyoming calls it another day), it is almost impossible to catch a tail wind. So don't ski to work, or ride a bicycle unless you want to work against hurricane-force winds in both directions (never could catch a tail wind in Wyoming).

Then there is the problem of frostbite, where windchill reaches fingers through the best of gloves - it makes you wonder if the Apollo Spacesuits would keep you warm in Wyoming winters. Still, it is a wonderful place.

Soke took early retirement from the Geological Survey at the University of Wyoming for ethical reasons. He could not work for a completely incompetent director and went to work for DiamonEx Ltd (an Aussie Diamond Company), consulted for other mining companies and packed up and moved to the other extreme on our planet: Phoenix. But on our way to Phoenix, Soke thought about buying a building to house the new Hombu dojo and was looking forward to opening the Arizona School of Traditional Karate where we could expose people to the traditions and philosophy of martial arts. 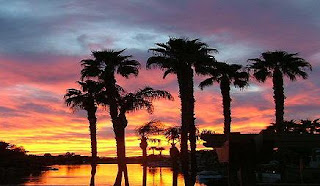 In the Phoenix Valley, temperatures are high enough that Soke Hausel periodically checks his Wyoming truck (which has no air conditioning - didn't need one in Wyoming) to see if it has melted into a puddle of red metal, rubber, and plastic. It is so hot in Phoenix, that he was under the impression that it got up to 123 degrees Fahrenheit in the early Spring of 2006. However, his wife thinks he was delusional (heat does that to the brain). It only got to 119 degrees (maybe a little lower, but it was hot)!

But really, it does get upwards to 125 degrees in the summer. Hot enough to fry eggs and feet on the pavement. The only heat Soke Hausel reports that he ever experienced this intense was in the outback of Australia while searching for diamonds near the Fitzroy River.

Bill Bryson wrote in his book on the Australian outback entitled, "In Sunburned Country" that the highest temperatures recorded on earth were in Australia's Outback: 145 degrees Fahrenheit, enough to melt Kangaroo. So after Soke Hausel arrived in the East Valley, he started teaching karate at ASU. But the ASU  bureaucracy was so bad that even this world-famous Grandmaster and Hall-of-Fame martial artist was defeated by the people in charge of university clubs, club sports and physical education.

Soke Hausel wondered how parents can allow their kids to be educated by these bureaucrats. There is also little incentive to provide a service by the bureaucrats. The last semester he taught at Arizona State University, the director of the SRC (student recreation center) and the program head decided to make like more like socialist California. According to Soke Hausel, "I was receiving practically nothing for teaching as it was, then they decided to take away my parking permit and if I wanted to continue teaching classes, I would either have to park miles from the university, or pay a nightly parking fee to park in the visitor's parking". Then they also cut his teaching fee in half.

So, now he was paying ASU to teach traditional martial arts! If you are as out-ranged as Soke and myself, we encourage you to contact the SRC director and the University's President and let them know that they lost a world famous martial arts instructor. But here is the catch, you can't actually contact these people. They do not answer the telephone or provide email addresses to the public.

So, we opened our Hombu dojo on the border of Mesa and Gilbert on Baseline Road near Country Club.

In 2008, Soke went back to Siberia - err,  we mean Laramie. The University of Wyoming Campus Shorin-Ryu Karate and Kobudo Club was celebrating its 30th anniversary. It had out-lasted some departments on campus such as the Department of Physical Education, Department of Kinesiology, Nursing, MMRRI and many others. But the UW karate club and other classes taught by Soke Hausel  attracted many students to UW. 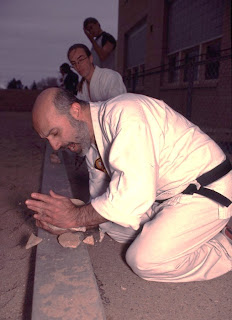 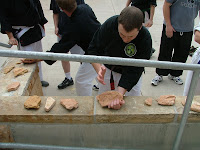 The club was established in 1977-1978, and through the years, we put a few thousand students through this program from all over the world. While students were working on BS, MS, and PhD degrees, many graduated with honors and took home certifications for black belt or mudansha (lower level color belt). Few other universities in North America provided such an opportunity. A student graduating in geology, for instance, had the added benefit of going to work for industry as a geologist and earning a certificate in karate that could potentially be used as an added profession - they could open their own dojo and earn added income, or just teach part time at the local gym. And if nothing else, if they forgot a rock hammer on the way to the field, no problem, we also taught all of our students how to break rocks with their hands! 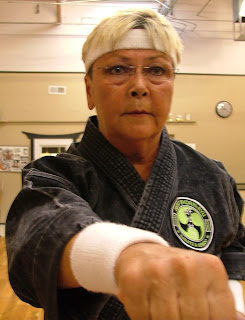 I know of at least one case where a student in geology graduated with a MS and decided that karate was more lucrative. He still operates a dojo in Albuquerque. The University of Wyoming club includes many faculty, staff and members of the Laramie Community. We even had a couple of priests and missionaries, and are proud to say our organization has more PhDs, scientists, engineers, etc per capita than any other martial arts association in the world! If we can't beat you in a fight, we surely can build a bridge or road much faster than any other martial arts organization.

Over the years, many of our members indicated they had picked the University of Wyoming over other universities simply because of the martial arts program that included training in karate, kobudo, self-defense, jujutsu and other samurai arts and our international associations made our organization impeccable - our primary associations include Juko Kai International, Zen Kokusai Soke Budo Bugei Renmei and Seiyo Kai. 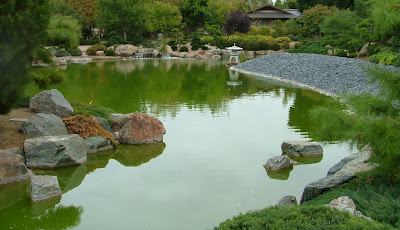 But the UW club was not the only anniversary to be celebrated. In 1964, Soke began training in Kyokushinkai karate at the Black Eagle Federation dojo in Salt Lake City, Utah. Thus, in addition to the University of Wyoming's Karate Club anniversary, 2009 is also Soke's 45th anniversary in martial arts. It's hard to believe he has been  kicking for that long.

In 1969, he began teaching karate at the University of Utah Shotokan Club a form of Shorin-Ryu. This is also his 40th anniversary teaching martial arts. In 1999, he was appointed the Sokeshodai of Seiyo No Shorin-Ryu Karate Kobudo Kai – Thus 2009 is also his 10th anniversary as Soke (Grandmaster) of Shorin-Ryu Seiyo-Kai Karate. And of course, 1999, Soke Sacharnoski and the Zen Kokusai Soke Budo Bugei Remnei certified Seiyo No Shorin-Ryu Karate Kobudo Kai as a new form of Shorin-Ryu. So this style has been officially in existence for 10 years. There are probably other anniversaries he hasn't thought of.


Over the years Soke taught at the University of New Mexico, Arizona State University, University of Utah, University of Wyoming, Gold's Gym, KourtHouse, Methodist Church and elsewhere. He really enjoyed teaching at universities because of the type of students, but all universities are filled with bureaucrats that would make any czars of the Obama Administration look competent - they promise you everything and give you nothing. Our martial arts association now has students scattered all over the world who are geologists, artists, writers, astronomers, biologists, zoologists, law enforcement agents, linguists, civil engineers, electrical engineers, petroleum engineers, mechanical engineers, teachers, professors, physicists, mathematicians, business owners and more. 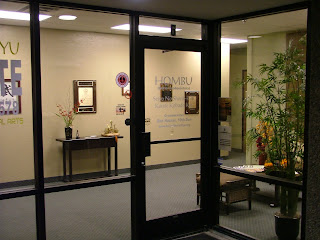 So, here we are in the East Valley sweating profusely and training at the Arizona School of Traditional Karate. Soke tried teaching at ASU, but they seemed to be more interested in improving their bureaucratic skills. Thus, in 2008, we decided to open a Hombu training center in Mesa at 60 W. Baseline. We made this Arizona dojo look as traditional as possible and we invite everyone to stop by to talk about martial arts. We look forward to meeting you!

At the dojo, we teach traditional karate and kobudo for adults. No person and in particular, no woman in the Phoenix valley should be without self-defense training – it is dangerous here. And with so many illegal drug runners running around from Mexico, one must be prepared for anything. You can find out more about us by visiting our dojo in Mesa and learning about our international martial arts association. We practice traditional karate as it has been taught for the past few hundred years in Okinawa, we strive to be the best people we can be, learn some Japanese, focus on traditions of the dojo and Budo, and strive to meet interesting people and have a great time sharing our art. 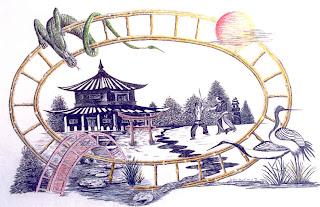 The Arizona training center is open to the public - we focus on Adults and Families. Come learn the traditions of Okinawan Karate & Kobudo. Much of the class is conducted in both Japanese and English to help students learn Japanese. We also teach meditation, philosophy and martial arts history interjected in karate classes. A class schedule is available on the Seiyo Kai website.

And stop in and say hello. We are at the Arizona School of Traditional Karate near Walmart and SunDevil Auto. 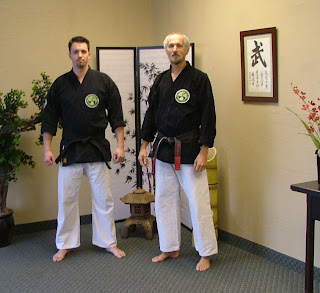